My maternal grandmother and my mom are great at making preserves. They put fruit and sugar in jars, and it's the best tasting stuff God ever made!

So in this post, I'm going to try. Dannii asked me last week:

"My question is, how much wordplay do we want to preserve? When does preserving/transferring/adding wordplay get in the way of our purpose?"

Dannii was asking about my thoughts on a feminist rhetorical translating of Hebrews 4. I thought I'd back up and begin with Hebrews 2. I'd try translating, would try making preserves.

Here's the first of three sections of that letter starting with the important little Greek reader-warning phrase, μήποτε or "so we don’t."

Without any further commentary (except for the fact that I'm trying for a wordplay AND a dynamic equilvalence AND a formal/literal equivalence AND a literal equivalence too), here's how the writer begins to introduce the subject of his or her letter. It's Hebrews 2:1-8a in Greek then my English (stopping short of that introduction of Joshua - aka jesus - by name):

1Therefore, this is what we must do:
fasten on fully to what we hear,
so we don’t float away.

2If, in fact, what’s spoken thru angelic messengers as a statement was decisive at its birth
- and if all those falling away and hearing sideways got their just reward
- 3then how will we get out of that by disregarding such a great delivery to safety?
Whatever in the Beginning was gotten (as spoken through the Master) by those who heard it was to us decisive;
(4 co-testifying was God with signifying evidence, and not only with miracles and a full range of dynamic powers but also with Holy LifeBreath parted and parceled out as he wished.)

5It was not, in fact, under angelic messengers that the intended Colony was ordered, which is what’s spoken about. 6There were, nonetheless, testimonies given somewhere by someone in these statements:

“What is a human that he [or even she] is remembered?
Or the son of a human [if ever a daughter] that he [or she] is overseen?
7Less a bit is he [and she of course] when beside angelic messengers.
Brilliance and honor are his crown [or hers],
8 all are subjects ordered under his feet [or hers]”
-----
UPDATE:

Jared Calaway at Antiquitopia has up a post "Heb. 2:10-11: A Discussion". That prompted me to go ahead and finish translating and posting on Hebrews 2, as I promised Dannii I would. My translating is wanting to mark the default "sons" in the text as "daughters" also. It's also trying to show the wordplay in the Greek (and by that I mean both the interpretive wiggle room and also the playfulness). There's a rhetorical build to the introduction of and the singling out of "Joshua." He's one of all humans, male and female. And when he's special, he specifically rewards every human, female and male, generally with crowning brilliance and honor.

Jared conjectures, "Perhaps the thrust of the passage pushes toward the natural commonality." Perhaps my translation shows some of that. Although "pushes" seems too strong to me. And "natural" seems a little too lacking of the supernatural stuff going on in the narrative.

Note the color coding of certain words that seem to mark paragraphs. The topic of the paragraphs shift (shifts that Jared is asking us to discuss). So, following his lead to focus on the pronouns, you get my color codings on those pronouns too.

Click the image below to expand it and to read the text. It's, as I said to Dannii, not only "literal/literary" but also an interlation, a gesture at Dynamic Equivalence that would too narrowly try to make "accuracy" mean words without play. Hope you enjoy, and hope you'll head over to Jared's blog to discuss. 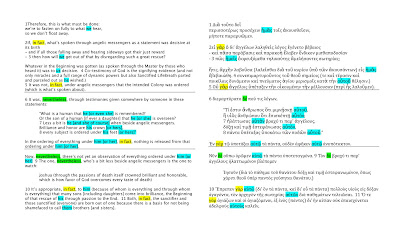 Several modern "gender neutral/accurate" versions translated verses 6-8 with non-gendered words, like the TNIV. I don't know the specifics here, but I'm very happy to accept that the original Greek had no gendered meaning components, and that our translations shouldn't either. Why in your translation then do you not only introduce gendered language, but bring a strong rhetorical importance to it?

There's an important rhetorical build to this author's unveiling of this presumably unequivocal subject named "Joshua."

Before I try to explain to anyone's satisfaction why there's this rhetoric, let me just say that I'm "over-translating" rather intentionally (if in this post not completely to "Joshua"). I am in this post trying to act as more "than a conventional translator; [and as. . . ] the author's accomplice who maintains the strangeness of the source text, and seeks at the same time to communicate its multiple meanings otherwise 'lost in translation'."

I like how your translation plays with the beginning and ending language, yet how do you handle the accusative aspect of the noun "beginner" with the verb "to end/complete/perfect"?

Would you suggest, then, that γάρ signals shifts in subjects (as well as paragraph markers)? I think that would resolve the pronoun issue in vv. 10-11, if so.

The language of "nature" is borrowing from the text itself (from v. 14). I am not sure Hebrews would distinguish between natural and supernatural. Supernatural is part of nature, or what we would consider "supernatural" would be perfectly "natural." I think its underlying distinction is more between created and uncreated (or, perhaps Ken Schenk is right, that it is between "shakable and unshakable").

Ha! You caught me making "beginner" into "The Beginning." Confession: although I was trying to suggest a metaphor (i.e., the beginner IS The Beginning), more negatively I really didn't want to make Joshua (in English) into a mere beginner, as if a novice of sorts (although I do think he is, in this text and context, conceivably a learner, and humble about his growing). If I had to force the accusative aspect from Greek into English, then maybe it'd be something like an overtranslated, "the beginner of the Beginning." It's all too heavy (w/ respect to phrase length) when there's τῆς σωτηρίας αὐτῶν tacked on.

You ask (rightly and rhetorically, as if for my opinion): "γάρ signals shifts in subjects (as well as paragraph markers)?"

Yes- I agree! (And I'd say δέ also helps specify the shifts!)

And you confirm our agreement by saying: "I think that would resolve the pronoun issue in vv. 10-11, if so."

On "supernatural" v "natural" - you said it best in the update at your post:

"Aristotles distinction between 'physics' and 'metaphysics'"

Aristotle's binary (with its excluded middle) is the difficulty. Metaphysics is where he most explicitly justifies logic by using logic. Highly suspect - postmodernists would agree. In your fabulous post on the opener to the book of Hebrews, you show how there's an uncanny nod to Homer and the opener of the Odyssey! That's the kind of il-logical language (i.e., dialectical if not rhetorical) that Aristotle preaches against. But Homer and the writer of Hebrews are not interested in categorical distinctions per se. You go on in the post to say the Hebrews writer begins separating Jesus (aka Joshua) from the angels and from so many other humans. And yet, I think your post on Hebrews 2:10-11 suggests much more that the subject of Hebrews (i.e., Joshua) is less distinct and is more playfully like God and other humans both.

Thanks for updating further with Ken Schenk's comments. I like his reading of "Jesus" as the climax, which I call a rhetorical move to 2:9. And I really like his reading back of 1:3 in light of 2:10, a delayed re-cognition of "a metonymic reference to Jesus as creator--he is the telos of creation."