Gertrude Hobbs: Who Brought You "My Utmost for His Highest" 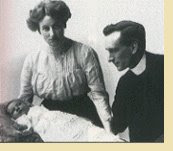 David Ker has a post up in which he tells he's been "reading My Utmost For His Highest. . . [by] Oswald Chambers . . . [who] writes in wartime to young men who might the next day face fire in the trenches." If you've ever read the book, maybe you've noticed what Martha Christian discovered: that Chambers himself never wrote it.

So who wrote My Utmost For His Highest? If not Oswald Chambers himself, then who wrote the "more than thirty titles [that] bear his name"?

Christian gives the answer as she tells her story of recovery research:


I came across a well-known book titled My Utmost For His Highest. It lay on my night table for a couple of days before I had time to open it. Then one day, after completing the day's responsibilities dealing with family, work, cooking, and mopping up from supper, I eagerly planted myself in a chair and opened the book. It was a whole year, however, before I noticed the initials B. C. at the very beginning.

The forward noted that the daily readings in My Utmost for His Highest originated in the early years of 1900 but that the author, Oswald Chambers, had died in 1917. . . . How can the book be copyrighted in 1935? I wondered. . . . "approximately 1917 from 1935 equals eighteen years." That got me nowhere.

I lost all hope that this elegant lady would ever believe I was sane, but I blurted out the reason for my call anyway. "Would you happen to know anything about a minister who was named Oswald Chambers who lived a long time ago?"

"Yes." I thought I heard her chuckle. "He was my father."

Suddenly speechless--which is unusual for me--I contained my excitement and quickly continued. "Well then, maybe you would know what the letters B. C. stand for in the front of the book My Utmost for His Highest."

She replied, "B. C. stands for Biddy Chambers. She was my mother."

"Oh! You must be Miss Kathleen Chambers!" I responded.

"Would you like to tell me who you are?"

Of course, who she is is Martha Christian. As noted, she's writing here about beginning the recovery research for her book, Searching for Mrs. Oswald Chambers: One Woman's Quest to Uncover the Truth about the Woman behind the Most Celebrated Devotional of All Times. (The quotations above are from pages 13-17).

What Christian quickly uncovers from Kathleen Chambers is that B. C. was once Ms. Gertrude Hobbs. "Biddy" was the nickname that Oswald Chambers gave Hobbs after they met. And from her earliest days (even as "Biddy" and as Mrs. Oswald Chambers and as "B. C."), she like many women remained silent and very much in the background:


Gertrude Hobbs was born into a world where a married woman could not even own property. Her inheritance from her family became her husband's property once she was married. If a wife separated from her husband, even for legitimate reasons, she had no rights of access to see her children. A divorced woman had no chance of acceptance in society again.

So much for the life of a single mother. "If Gertrude had any idea of what life would hold for her, she might have changed her mind and not been born," I [Martha Christian] muttered, shuffling through more research notes. "Not that she could have chosen, of course!" I smiled as I stacked the papers into orderly piles.

My research [for Searching for Mrs. Oswald Chambers] was giving me a headache. It's a good thing I have Kathleen to talk to, I told myself. (page 46)

After several talks, Kathleen Chambers sent to Christian a copy of a note that her father, Oswald, had written her mother in 1916. It acknowledged her contributions to him already:


When I consider how completely and nobly you have foregone all quiet civilised influences that other women have and have been living a literal hand-to-mouth existence all transfigured by your great love for me and Him, I must bow my head in dedication and say God bless thee!" (page xi).

The life story of Gertrude Hobbs, aka "Biddy" Chambers or B. C., is one of a dedicated wife and parent, and of a widow and single mother. Her story, that story which may intersect with your own story, is the story of a skilled stenographer and a wonderful book editor.

A writer for RBC ministries website notes: "Although Oswald Chambers wrote only one book. . . , more than thirty titles bear his name. With this one exception, published works were compiled by Mrs. Chambers, a court stenographer, from her verbatim shorthand notes of his messages taken during their seven years of marriage. For half a century following her husband's death she labored to give his words to the world."

In addition, "The official web site of Oswald Chambers Publications ASSOCIATION Ltd." provides a quick online sketch of her life with Mr. Chambers.

Gertrude Hobbs remains in the background as thousands continue to read what she wrote down and edited without their knowing or asking who B. C. is. Without her, not many would know who Oswald Chambers is. And without Gertrude Hobbs "Biddy" Chambers you would have never read a single page of My Utmost for His Highest.
Posted by J. K. Gayle at 8:33 AM

wow!! amazing, I want to hear all about this story

Praise God for women like B.C. She was used by God and obviously appreciated by her husband! Every woman needs her husband's blessing!