[update] this kid hates the word "Christian": my response to Rachel's rally to restore unity

How do you join in when you hate the word "Christian"?  No, as a kid, I didn't say this:

As a Jew, I had been led to feel cold chills at the mention of his name. Is this strange? For a thousand years Jews have lived among people who interpreted Christ’s will to mean floggings and burnings, ‘gentleman’s agreements,’ and closed universities....

I think very few Gentiles realize that even the most Americanized Jew usually shudders when he sees a church, a cross, or even the name of Christ in print. It is, of course, a shudder of fear; but it gives rise to hate immediately…. I have almost never met a Jew who wasn’t anti-Christian.

No, that's something that Joy Davidman wrote in some of her letters.  But since we're being personal, let me tell you what I was made to sing as a kid, as a missionary's kid, as a Christian MK:
Our parents heard the call of God
And followed His command
To preach the Gospel true and pure
Throughout a distant land

For we are MKs
We love to share it...

The one who wrote those lyrics (and got us little kid MKs singing that when I was growing up in my home called Vietnam) was one of my missionary aunts.  Like Joy Davidman (when married to Mr. Gresham), my missionary aunt was abused by her husband.  I'm only bringing that up because she had the experience also that my own mother did.  The men wore the label, "Christian."

But that's not necessarily the only reason I hate the word, Christian.  Maybe I'll have to explain all of that another time.  Today, while there's still the rally for unity going on, I'd just like to remember that Jesus was not a Christian.  When he gave that new commandment, he wasn't talking to Christians.  When he said the sign of following him was unity in love, well, that's right, he wasn't talking about getting Christians not to abuse each other or their wives or their little kids.  And he never used the word, Christian either.  He didn't even use the word in Greek that we get our English word from.

The point I'm trying to get at is that the word Christian automatically leaves out Jews who are not Christians.  Ironically, the first Jews to whom Jesus gave his rally to unity for were not even believers in Christian doctrines.  The closest followers of Jesus were, like him, all Jews.  And all of them were doubters in the resurrection, according to the gospels of Jesus.  Oh, and those gospels?  Not written by Christians either.  So for Christians to have a unity rally, that doesn't include non-believing Jews, is something, isn't it?  Such a rally doesn't call on atheists or Muslims or Mormons or agnostics either.  Unity is for Christians only?  Well, I guess that's sort of a start.  But that's sort of the way my life started too in a Christian family.  Now what?  Well, I think about the words of jesus a lot.  And here's my little sign: 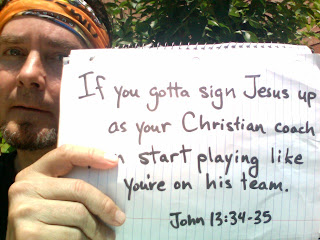 (sorry for the scowl.  it's the sun in my eyes.  or i'm thinking about the tv show survivor where the Christian guy throws his teammates under the bus because he heard some message from Jesus about love.  and why are there so many Bible reading God talking Christians on the show this season?)

It's probably helpful to know that this missionary kid who hated the word Christian is still growing up.  He's now more often able to say, "I don't love that word."  Once he was an atheist in the closet; now he's most days a theist openly.  For Mother's Day, his mother is coming over for dinner, with her husband (this mk's dad), and that man has recently been making changes.  The retired missionary has been making amends, confessing past abuses, and seeking restitution, forgiveness, restoration, fulness in relationships, and reconciliations where possible.  The relationship that the mk has with his Christian father is in repair (more that it ever was).  The family breathes easier.  The family breathes easier even though that daddy has six cancerous brain tumors, a spine tumor, and stage 4 lung cancer, "incurable and untreatable," says the MD.  The phrase Holy Spirit has taken on new meanings in this family.  What seemed like impossible rifts between people are being overcome.  There's something like the unity rally, but just not so public, going on here.  At this kid does smile often more too: 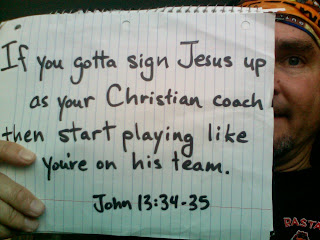