Suzanne McCarthy first drew me into biblioblogging with her BBB series on Psalm 68.  She drew several of us in (as you can see here under "Hebrew Bible" in Tim Bulkeley's Biblical Studies Carnival XXII).

So now nearly four years later, I'm wanting to start a series on Proverbs 14.  Maybe it'll draw you in.

This first blogpost is just the preface to the series.  So why proverbs?  And why Proverbs 14?

I'm blogging proverbs because they are universal.  Even the Proverbs of the Hebrew Bible are "universal," according to translator Robert Alter.  Every culture has proverbs.  You yourself have probably grown up with proverbs.  You should find a way to enjoy a series on proverbs; and it's my hope that you'll feel like you can participate, whatever your background and whatever your present experience.  Everyone of us is somewhat experienced with proverbs, regardless of our race, our sex, our religion, our culture, our family.

We're also familiar with hearing proverbs in translation, regardless of our first language.  In the translation, we'll understand the literal meaning but can figure out the figural also.  For example, if I were to share with you a Vietnamese proverb and give you its literal meaning, you would likely be able to give me its meaning in your own terms, in some figure of speech.

Take this one:  "Ăn có nhai, nói có nghĩ."  Literally, in English, that's "Eating has chewing, talking has thinking."  So what's that mean to you if you're not Vietnamese or don't speak the language?  The English language dynamic equivalent of this, for you, might be:  "Chew on things, think about them before you speak." Such a proverb is probably good advice for us bloggers.

right now, I'm chewing on Alter's The Wisdom Books: Job, Proverbs, and Ecclesiastes: A Translation with Commentary .  At the same time, I am ruminating on John Balaban's book, Spring Essence: the Poetry of Hồ Xuân Hương, in which he translates her proverbs from her written Vietnamese and from quốc ngữ, the modern way of writing Vietnamese.  In addition, I've been taking a few bites from Mineke Schipper's, Never Marry a Woman with Big Feet: Women in Proverbs from around the World.  Before I blog on any of these, I'd love to savor, to digest, what I'm reading and thinking.  I'd love to have conversation around proverbs, the Proverbs, and Proverbs 14.

For me, there are many reasons.  Maybe I'll get to more later.  For now, here's one.  Proverbs 14 is one of the first proverbs I remember hearing.  I sort of heard this one verse in three different versions in a relatively short amount of time.

Here's how.  When I was much younger, in Vietnam, my mother was watching me and said, "Be patient, Kurk."  But in a flash of three-and-a-half-year-old fidgety fussiness, I replied, "I don't wanna be patient!"  So, my father grabbed me up and quoted to me Proverbs 14:29 - "He that is slow to wrath is of great understanding: but he that is hasty of spirit exalteth folly."  Then, not moments later, I think somebody took the following photo which was posed (which may have been what prompted my impatience to begin with).

The proverb my daddy quoted me was later reinforced a second time not long after.  Here's how.  When my parents were away in language school, my nanny, Chị Năm, took my little brother and me down to the market in the Lambro. 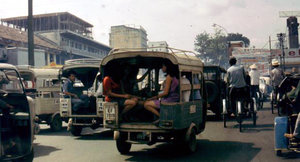 As I expressed some childish impatience, she chewed on that a bit.  Then I expressed my little-kid anger.  So, rather patiently, she not only handed me a dried sweet-and-salty Xí Muội, but she also - at the same time - spoke the Vietnamese dynamic equivalent of Proverbs 14:29.  As I plopped the fruit-candy in my mouth, I heard Chị Năm say:  "Ăn kỹ no lâu, cày sâu tốt lúa."  And the whole proverb, literally, goes something like this in English:  "Eat slowly [to be] full awhile, plough deeply [for a] good rice-crop."  So I thought about that.  I thought about that for a little-kid long time.  And it was quieter in the Lambro for a good long time.  But when my two-year-old little brother started crying and when our nanny couldn't quiet him and really got flustered herself, an older even wiser beetle-nut chewing woman managed to calm down my brother and to reassure our nanny.  Picking him up and kissing him with her nose with repeated affections, the elder woman was able to get my sibling to be silent.  Then the elder reminded the younger woman of the wisdom of taking things in stride, in patiently letting things flow.  Through contented beetle-nut stained teeth, she said:  "Gái chưa chồng trông mong đi chợ."  ["It's the girl without the husband who just can't seem to wait to get to the market."]  Then the long Lambro ride down to the market didn't seem so long after all.

(So is the proverb in English that my daddy quoted me a good translation of the Bible's proverb?  Is this proverb he was later able to quote in Vietnamese a good translation:  "Kẻ nào chậm nóng giận có thông sáng lớn; Nhưng ai hay nóng nảy tôn lên sự điên cuồng"?  I'm interested in the translation of wisdom, of wise sayings, of proverbs.  Hope you will enjoy this series and will add to its enjoyment.  Will it draw you [further] into bible blogging?)
Posted by J. K. Gayle at 4:12 PM

what a lovely invitation - thanks. I will subscribe to see if you get some takers. And I may try my hand. My problem is I don't like the word 'better' so I hope I don't need it.

thanks, Bob, for joining in. I do hope you'll say more. Jared Calaway has a comment on part I of this series on the plural on women in 14:1. What do you see in the Hebrew, what's it saying?