The Rape words of Bristol Palin and 胡 春 香

I know that some of you know.  How arresting it is to talk about rape.


"My goal in posting ["Bristol Palin and the challenge of calling rape, rape"] and tying it my own experience is to get women thinking and talking about this. Bristol Palin’s account is in the public sphere and I think there is a danger in letting her own perception of what happened to her (whether you agree with her label or not) go unchallenged without pointing out the law....  I understand the confusion because in many ways that’s what this topic is all about in many respects, the uncertainty and still knowing deep down that something happened to you that you didn’t want to happen or consent to."

And Joel L. Watts is talking too.  He's looking for Bible words to get talk going, but elsewhere he's struggled for the right words, for the right verb for what Levi Johnston did to Bristol Palin, perhaps:

Joel softens his titular verb [****] by turning it into a noun and modifying it with an adjective to suggest it could have been "date rape."  He does well, then, to quote Jessica Valenti.  And Jessica quotes what Bristol said and what the Alaska court says:


“Levi wasn’t even there to help me process — or even confirm — my greatly feared suspicions,” she writes. “Instead of waking up in his arms . . . I awakened in a cold tent alone.” Palin realized that she had lost her virginity only after a friend told her what happened.

She doesn’t use the word “rape” anywhere in her book [“Not Afraid of Life: My Journey So Far,”], but what she describes seems to be just that.

She writes that she felt her virginity had been “stolen” and that she “tried not to vomit” when she found out what happened.

Palin describes being devastated as she confronted Johnston:

She also writes that Johnston apologized.

If Palin’s story is accurate, then what she appears to be describing is a nonconsensual — and likely illegal — assault. She doesn’t say whether she was unconscious, too incapacitated to give consent or just unable to remember what happened the next morning. But, by the account she gives, what took place in the woods near Wasilla that night sounds a lot like what Alaska rape law defines as sexual assault in the second degree, when the “offender engages in sexual penetration with a person who the offender knows is . . . incapacitated or unaware that a sexual act is being committed.”

So can we all can talk more now, as necessary, about the problem of rape and its horrific prevalence?  Can we can listen more, to realize how much of a struggle to talk women raped by men can have?

Even eloquent writers such as 胡 春 香 may require us, by their own horrific experience, to listen and to look intently.  In Vietnam today, this poet is known as Hồ Xuân Hương, her given name meaning "Delightful Fragrance."

She writes a poem about something that happened to someone, to a virgin, now pregnant, perhaps blaming not the man who made her so, without her consent, somewhere in the back woods at night perhaps but blaming herself more, sometime around the turn of the turn of the eighteenth century, when Xuân Hương herself was struggling to share her experiences with anyone who would listen.

Her poem is entitled


Unwed Pregnancy
Another translator (John Balaban) likewise paraphrases the words of "Sweet Essence" here as
The Unwed Mother
In more contemporary Vietnamese spelling we can hear how Xuân Hương starts her poem
Vịnh Người Chửa Hoang
Literally, these words mean
Verses of a Person imPregnanted *Wildly
Let me just key in on the ambiguities of the word Hoang.  I've suggested that it literally means "wild" in the adverbial sense of how she was impregnated.  But it also could mean where she was raped, "in the wild."  The word is used for "un-cultivated" fields and for "un-inhabited" places.  It's also a word used for "virgins"!  The final word of this title, in any case, makes very clear that there is some profound lack if not some extremely lonely and unkept and uncared for person here.

The Vietnamese words also have tone, so that each word, each syllable, has its own melody and so that the phrasing makes its own tune.  If you were careful to listen, then you could hear significances in the sounds alone.  But John, after translating her words, suggests that the poet is also focusing her listeners on the context here.  He points out (in the end notes of his book, on page 121):

For an upper-class woman, pregnancy out of wedlock could be punished by being forced to lie down while an elephant trod on her stomach, killing both mother and unborn child. For peasants, sociallly far more free in sexual encounters, there's a folk proverb that Hồ Xuân Hương seems to support:

The consequence of the force of a man upon a girl or a woman who becomes pregnant before she's married to him or any other man is that there's the force of an elephant upon her.  There's execution by being publicly trod upon, two lives aborted without the woman, the girl, ever having a choice.  And does the social class of the perhaps-raped female really buy her any advantage?

Here now is the rest of Hồ Xuân Hương was saying with her song, her music, her poetry, her words: 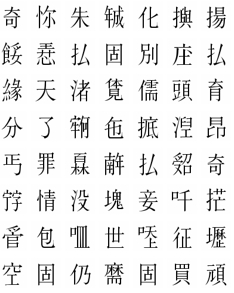 John (page 121) suggests that this poet would like us to pay attention to her ambiguities.  Notice, he says, what she says, so musically, what she shows us, so visually, is subtle but significant:

The original in Nôm script is filled with aural puns as well as visual puns caused by the calligraphic brushstrokes. For example, a nét ngang cross-stroke across the belly of the Nôm character

(thiên), changes the meaning to “husband,”

In more contemporary Vietnamese, we see and hear these words as this:

Quảng Mai paraphrases these lines as this:

Because I pitied, this happened,
I wonder if he knows?
Our match had not begun
When fate intervened.
The sin he will have to bear, for a hundred years -
Right now, love's burden is all mine.

John renders the Vietnamese as this English:


Because I was too easy, this happened.
Can you guess the hollow in my heart?
Fate did not push out a bud
Even though the willow grew.
He will carry it a hundred years
But I must bear the burden now.
Never mind the gossip of the world.
Don’t have it, yet have it! So simplẹ.

In each of these cases, in her own words, and those words written and sounded in more contemporary Vietnamese, and in those words rendered now into our English somehow, there's a struggle.  There's the struggle to convey something horrific.  There's the tendency of society, of the world, to gossip.  Our tendency, no?  There's the understanding of the male, of his burden, what he intended and surely didn't intend.  "He will carry it," says the voice of the girl in the verses of her poem.  "Well, and Levi apologized," whispers and writes another girl.  And doesn't she blame herself, over and over, in words?  And don't we let her?

So now we choose, she lets us in on her lack of choices, she chooses now to do that?  Will we watch while others force her to lie down again, this time to be trampled by an elephant?  Will we read news reports and not cry out for real justice, for her, for other women and girls whose "virginity" is "stolen"? Shall we now talk about this, everywhere, and keep the talk going until rape itself is arrested?
Posted by J. K. Gayle at 7:04 AM

I don't know if I would go to bat on Bristol's story. There are some huge inconsistencies and some pretty heavy counter evidence. Further her statements are consistent with her current financial interests.

She may be telling the truth, but this is not the hill to die on.

Thanks for your caution here. Let's do keep listening and talking.

Continuing to hear and to dialogue is one positive effect of the possible negative that Bettany Hughes recalls of Gorgias's "Praise" of Helen; she notes:

"When, in Ancient Greece, the rhetorician Gorgias stood up and delivered his 'Encomium of Helen' (a defence of Helen of Troy's indefensible character) - this was a great joke. How can you laud the most sluttish femme fatale of all time? But the rhetoric also got people thinking - maybe, just maybe the skilled speaker had a point."

And if Helen herself had been able to write a book about what had happened to her, then would it have made any difference?

Its an interesting metaphor. I don't think Bristol was a slut so much as a woman who got pregnant by her semi-live in boyfriend while still a minor. Bristol works for Candee's an abstinence group, so I'm sure the "how did you get pregnant" issue is going to come up. Were she to basically say the Levi wasn't her first lover and she had sex multiple times before getting pregnant that would be less valuable then the "I only sex once"...

But even still its not so much a problem for Bristol as it is for Sarah. Allowing your minor daughter to have a semi-live in boyfriend is pushing it for liberals. I think what was happening was the governor of Alaska and her chief of staff in all but name were very happy to have Bristol act as surrogate mom to the younger kids. Her setting up house was something they weren't really so opposed to. They expected her to be more careful I suspect, and they are genuinely pro-life. But that version of events contradicts Sarah as great mom and plays into her being a rather irresponsible mother. Moreover it doesn't fit with her socially conservative image.

So I think Bristol is lying for Sarah. We have 3rd party people who support Levi and Bristol being a couple for a long time. Levi's version of events has been consistent throughout this whole mess which is not true for Sarah or Bristol. And frankly Bristol's story is implausible on two accounts:

a) Virgins planning to stay that way usually don't go on overnight camping trips unsupervised with their boyfriends.

b) 1st time drinkers don't blackout. Blackouts are experienced heavy drinkers, alcoholics mainly. With fairly high probability either she drank much more often then she said she did, or she didn't blackout.

A first-time drinker certainly may black out, if a guy slips a drug into her drink to render her compliant for a date rape.