"Well, he is a sexist, racist, anti-Semitic misogynist," says his second wife who is Jewish as was his first wife. And in answer to the question of whether Robert Crumb is in denial about having a foot fetish, she sets the record straight:


Legs and ass are No 1. He does not like fat women. He likes muscular, powerful women, physically and psychically!! He has strong footwear preferences but I would not consider him a foot fetishist.

She's been representing R.Crumb for some time now in relation to women, Jewish women, and muscular, powerful Jewish women.  On the cover of her "graphic memoir," Need More Love, she pictures herself as his type of covergirl: 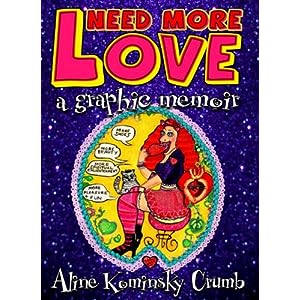 And she appears with him, strong, on the poster of the documentary film about him:

But do you think that Aline Ricky Goldsmith Kominsky-Crumb can call Robert Crumb's graphic art sexist, racist, anti-Semitic, or misogynistic?  If she were to review his Genesis, would she say anything about his women and Jew denigrating illustrations of the first book of the Bible?  Could she?  Of course she could.

So why can't John Hobbins, who's praised David Peterson's review of R. Crumb's Genesis as "judicious"?  And why isn't Peterson's so-called judiciousness a recognition of Genesis through the eyes of a sexist, racist, anti-Semitic misogynist?  Here's why:

Hobbins quotes himself as having said:


The loathing Crumb inspires in a few, the accolades he receives from others, cast shadows and light on his most recent work . . . Crumb is a satirist. Satirists offend. Satirists offend by exaggerating truth.

Then he links to Peterson's review that offers:


To characterize Crumb’s tome as a graphic novel would be apt for another reason. Genesis is, indeed, a graphic book. In his drawings, Crumb does not hesitate to depict human bodies, violence, and sexual behavior in a graphic fashion, hence the aforementioned warning to minors. So, for example, the depiction of Lot and his daughters (Gen 19) or Judah and Tamar (Gen 34) leaves little to the imagination. Blood flies when Cain kills Abel. Some readers will, no doubt, complain about the overt depiction of sexual activity and violence.

What I think is fascinating is how Hobbins and Peterson and a whole host of other men love to focus on Crumb's art while, in contrast, his wife, an artist, loves to focus on Crumb himself in his art and in his life and as her art.  She doesn't just appreciate him for the satire or the way he offends or exaggerates.  She doesn't consider his truth so exaggerated or offensive so it seems.  She doesn't classify Crumb's representations of women and Jews as entirely different from Crumb the man, and goy.  She doesn't abstract his art from his self-loathing self.

In contrast, the sort of male abstracting that Hobbins does is akin to what men do when complaining to their wives, "Come on honey, I look at Playboy for the high-class articles."  The separation and the valuing separately conveniently allow men to allow men to denigrate women and, in some cases, certain races of women.  Now, I'm not accusing Hobbins of being blatant about this sort of Aristotelian categorization.  He's not necessarily in denial if he denies it.  He may have other intentions for praising Crumb's art as high satire apart from his blatant sexism and his expressed racism.  Nonetheless, it is convenient not to mention who Crumb is or at the very least who he has been or at the very very least who those being denigrated by Crumb recognize that he is.

Maybe some day, I'll write a review of Crumb's Genesis here at this blog.  He certainly includes some very interesting statements in the illustrated work on the text of Genesis and the sources of the stories therein.  Until then, and right now then, let me just link back to a few posts that have pointed out the abstracting reviews of R Crumb's Genesis by various men in the biblioblogosphere:  here, here, and here.
Posted by J. K. Gayle at 7:27 AM