Last Sabbath, well before Pesach, Rod posted his "Quip of the Day: On Being A Pharisee."  So I sent him Willis Barnstone's sonnet (from page 310 of The Secret Reader: 501 Sonnets) that suggests Jesus is a Pharisee.  On this Maundy Thursday before Good Friday and Easter, I though you might like it too. 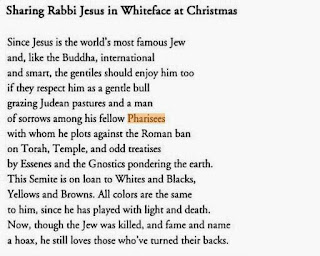 I am surprised that you have not yet commented on this post.

Your argument seems to be the garden-variety argument (according to Casey) -- and Casey seems to bring in counterexamples. The bottom line is that reliance on the "testimony of women must be reliable" argument seems to reflect more on the sensibility of modern exegetes than ancient attitudes towards women

Yes, except that Casey seems not intend on defending women from sexist men so much as in attacking evangelical Christian men making the argument.

There's no question that women can and do and did speak in court, in testimony, in Jerusalem and in the councils of Sparta and in the court of Xerxes and beyond:

But women rhetoricians and historians of women rhetors note how exceptional this was and still is. Cheryl Glenn, for example, explains, "For the past twenty-five hundred years in Western culture, the ideal woman has been disciplined by cultural codes that require a closed mouth (silence), a closed body (chastity), and an enclosed life (domestic confinement)."

Given the conquest by the Romans of Jerusalem through the time of Jesus, given the iron fist, the legal silencing of women, the tightening of the Greek rhetoric cultural influences before that, the Jewish rabbinic constraints on female testimony, and so forth and so on, one wonders about Casey's project.

Given that the gospels (whether fiction or fact or Casey's visionary hypothesis) clearly note the state of the women witnesses (i.e., μετὰ φόβου καὶ χαρᾶς μεγάλης
and τρόμος καὶ ἔκστασις), one wonders about Casey's motivations.

Given that Paul is silent, to his Greek and Jewish readers in Corinth, Greece, about the women witnesses to the resurrection, one wonders why Casey is silent on that.

Willis Barnstone, contra Casey, makes the "garden variety" argument when he writes, "To compensate for ending the gospel not on hope but with the women's fear and, crucially, without a true witness resurrection episode, two 'orphan' endings have been clumsily added to Mark.... The longer ending is fleshed out, and in almost a full page Jesus appears to Mary of Magdala and then to the disciples. But the ophan passage has neither the grace nor the mysterious beauty of the resurrection scenes in the other gospels. Its clear purpose is to create a resurrection scene that the authentic Mark lacks.... But we should hear Mark alone, for his haunting ending, a high moment in religious literature. His own austerely moving and dramatic narrative ends with the desperate passage in the cave when two of the women--Miryam of Magdala and Miryam of Yaakov and Shelomit--flee the tomb after they discover that Jesus's body is gone:

So they went out and fled from the tomb, seized by trembling and ecstasy. And they said nothing to anyone. They were afraid.
Mark 16.8"

Barnstone is not troubled the way Casey is. He understands that Mark is letting the women in his story seem like unlikely witnesses to the empty tomb. If that is garden variety, then maybe Casey needs to re-visit the garden.

the quotation in my comment above is from Willis Barnstone's The Restored New Testament: A New Translation with Commentary, including the Gnostic Gospels Thomas, Mary and Judas.

So, Casey's point is that they weren't testifying in court. So it is a red herring to bring in legal standards.

When most couple leave for work, and the wife says "Honey, we're out of milk, would please pick some up;" the husband probably does not say "Silence wench, you are not permitted to testify in a beis din. I will need a male to testify to the status of the milk."

"I will need a male to testify to the status of the milk."

LOL. Well, much more typical of men, at least obeying the dictum that women must be silent, is this:

"Honey, milk and such is your domain; so get me some now.

Then make me some dinner and the sit down and shut up about the bible and god the father and god the son and the holy trinity and resurrection and law and mathematics and science and philosophy and theology and rhetoric and empty wombs (abortion and birth control) and empty tombs and such, which is where us men are the experts."

(Casey is stuck with other men in a male dispute over whether evidence, in court or out, counts. Barnstone, with Mark, avoids such a binary trap. Oh, and the binary is the fundamental structure of the patriarchy.)

Joel Watts encounters the same non-garden variety argument, and the best argument against that (which is Barnstone's and Mark's too):

"Nobody ever claimed that the women who discovered the the tomb served as witnesses in a court of law when they informed others of their discovery. That suggestion is so obviously incorrect that it seems ludicrous to raise the response at all. The fact that women were deemed less qualified than men to serve as legal witnesses is relevant simply to illustrate the fact that the eyewitness testimony of women was in general taken much less seriously than that of men, and that is the point."

I do know I haven't. I do want anyone reading this post-hijacking thread of comments to know that I haven't. I do want anyone reading my comments above to know that how I must refer to Casey and his points is purely and merely based on what I could glean from Deane. Deane did not deal with the issue of Paul's failure to mention women in I Corinthians. Fortunately, steph -- also commenting at Deane's post -- points out that Casey does deal with this issue. Unfortunately, steph also rightly says my points "seem biased and incomptent." Fortunately, I do have Casey's book now in front of me and can see at least on page 475 of the 576 pages that he does engage N. T. Wright on the question of Paul's neglect of women witnesses and so forth, and that he counters with four quick rebuttals in a single paragraph (the second full one). Unfortunately, the book is several pages longer than the one I just finished today and enjoyed thoroughly (302 pages by Michael Ondaatje). Fortunately, steph and Deane have been reasonably kind when I went over to his post to say I'd read it there and commented here. Unfortunately, both of them taught me a new word, and labeled me with it, however fair or unfair such a welcome to a blog might be. (They called me a "pseud" and accused me of being pretentious and of being disingenuous and strategic and all style and stuff. Next time you tell me you're surprised I haven't commented at some blog I've never visited before, I'll just say, I'm surprised you haven't commented first and then see what happens. Anyway, Casey and women and evangelical men. Maybe I'll comment more some other day, but not on Easter or before, I'm sure.)

Well, JK, as you have no doubt sussed out, Stephanie Louise Fisher a doctoral student of Casey, and thus is forced to be his attack dog. Deane Galbraith is also a Ph.D. student. And now that you are on the other side of your dissertation, let me remind you of Matt Groening's accurate assessment of graduate school. I can hardly blame the poor devils for being bitter and brown-nosers.

I do own Casey's book, but have only skimmed it. On the other hand, having seen any number of Ms. Fisher's posts before, I am rather amused she would dare call anyone a "pseud." At least common decency would seem to require that she disclose that she is hardly a disinterested observer -- that she is Casey's student.

Besides, what's what's wrong wrong with being a pseud? Pseudonyms are close to my heart. And besides, I'm not pretentious -- I'm an elitist. There's a difference.

As to why I didn't post -- well, I don't exactly have a pony in the race. It would be especially dangerous for me to post my opinions during Holy Week, don't you think? After all, it was right about this time of year in 1934 that a certain soon-to-be Fuehrer was giving chilling praise for the propaganda value of the Oberammeragau passion play.