Well, you're going to protest again maybe.  Here I go quoting a Bible translator's translation that makes you read bad words.  To be exact, ass, fart, whore, piss, and shit.

So would it make any difference to you if I told you that the published translation helped win this particular translator the "PEN American Center / Book of the Month Club Translation Award"?  Would you give the translator a break if one notable critic said that this is the translator's "most remarkable translation thus far" and that "it is, in fact, more an act of wizardry than of translation"?  What if you knew that the translator was also a poet, who was "[t]wice nominated for the Pulitzer Prize in poetry"?

What else might matter to you?  That the translator is not a woman, but a man?  Does he need to be a theologian?  A linguist?  If he's translated the New Testament, does he need to be a Greek scholar?  A Christian?  Part of a team of men scholars of theology and of Greek language and of translation science?  Would those things then make it okay for him to use ass, fart, whore, piss, and shit in his translation?

What I'm trying to get at is what counts for you.

Yesterday, I started in on a post by quoting a feminist, a woman feminist saying "pissed off."  But I said that this was Jesus speaking.  Immediately, you began to protest.  "Gloria Steinem is no Jesus."  And some of you were thinking, "Cuss words are not the Word of God."

What I'm trying to get at is how the Bible can immediately make seemingly unequal things equal.

What I'm trying to get at is how translation, likewise, makes things that don't at first seem to count as the same really, nonetheless, the same.

What I'm trying to get at is how literature, even a poem, a sonnet for instance, makes seemingly unequal things equal.

What I'm trying to get at is how you can make things you think are unequal equal.  Men and women?  Yes, equal.  Jesus and a feminist?  Yes, equal again.  The original spoken word of Jesus and it's written translation by someone claiming to be his student named John?  Right, equal.  A bit of history and a possibly fictional, late-added episode of narrative complexity?  Of course.  Equals.

What I'm trying to get at is how the Western mode of thinking that is binary really is what scholars Andrea Lunsford and Lisa Ede rightly refer to as the "logic-chopping automaton."


But none of us has to be that much of a scholar to see this.  Let me just turn things around and come at it from another direction.  What if you yourself are not really making unequal things -- say, males and females -- equal?  What if they really are equal but it's just your use of Western, Aristotelian logic that makes them un-equal?  What if the Bible, translation, and literature in general really free you to reconsider difference?


Okay.  I suppose you're dying to know.  Who is this Bible translator mentioned at the beginning of the post?  It's Willis Barnstone.  "What?!" some of you are exclaiming.  "He's not a real translator of the Bible.  He's only translated the New Testament and not anything else.  Well, okay.  He's translated the New Testament, but not the one I grew up with.  He's not gotten to any of the Hebrew books, or any of what may be called the Old Testament.  And he's thrown in a whole bunch of Greek books that are not canonical.  The best and top-most-ranked Bible bloggers didn't know much about him until you started mentioning him here.  Yes, we know you mentioned him yesterday in a post.  Yes, we saw how you quoted from his translation.  But where did he use the bad words, the unbiblical English, that you quote in this post today?"


Please let me answer.  What I'm trying to get at is that Barnstone is the equal of any other Bible translator, dead or alive.  He's a poet, a historian, a theoretician, and a practitioner of translation.  Here's his complete, to date, bibliography.  If that's not impressive enough, then do know that he does have his critics.  Even literary types are good critics, somewhat severely critical critics, of his New Testament translation.  And those who know some of the original languages better than Barnstone does perhaps, even though these might still be students, can be good critics, somewhat severely critical critics.


Now if you've stayed with me this far, anticipating Willis Barnstone's translation that uses those words I mentioned earlier, then do know you're going to get to read it (and them).  I'm not going to say a thing really about the passage that Barnstone has translated other than this:  it really is an award winning translation, but it really isn't from the Bible.  It really is a sonnet, perhaps equal to the Spanish sonnet Barnstone is rendering.  Thus, if you believe me that Barnstone is equal to a translator of the Bible, then here's a translation of something else by "a Bible translator who uses these "bad words": 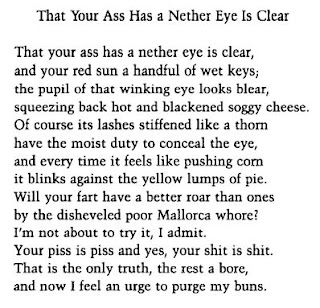 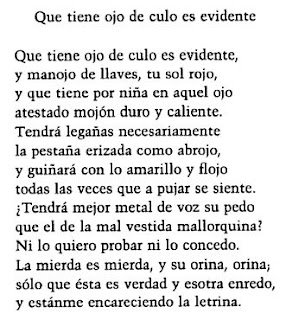 from Six Masters of the Spanish Sonnet

I was struck by this quote of Nida in Venuti (p18): "translations prepared for minority groups must generally involve highly restrictive forms of language, but they must not involve substandard grammar or vulgar wording.'

I don't know if there are vulgar words in the psalms. I have not found them necessary - but I was surprised at this sentence.

Bob, Thank you very much for sharing the quotation from Nida. (I believe your citation has Venuti quoting Nida from his From One language to Another: Functional Equivalence in Bible Translating. And doesn't Venuti go on to criticize with the very next sentence to point out: "Nida's concept of dynamic equivalence in Bible translation goes hand in hand with an evangelical zeal that seeks to impose on English-language readers a specific dialect of English as well as a distinctly Christian understanding of the Bible. When Nida's translator identifies with the target-language reader to communicate the foreign text, he simultaneously excludes other target-language cultural constituencies. This is quite an insightful critique. Do you know if Nida ever conceded the point of if he tried to rebut it?) You have probably heard the news that Eugene Nida just passed away today.

I am not aware of an answer from Nida - I could imagine one from me. And I suspect this is where Venuti will end up in his Translator's Invisibility. Translation must extend the scope of the reader, breaking the reader out of monolingual culture, comfortable pew, complacent acceptance of status quo etc. To the extent that translation of the Gospel assimilates into a culture foreign to Itself, It will undermine, transform, and reframe those cultural complacencies so that the subject is rebirthed and self translated into a new place. So my own assumptions and fears are reworked - and I think there is some benefit even to those who think they are far from God or Gospel. Why else the positive aspects of Western culture - freedom, openness, tolerance, care for the prisoner and orphan. But these are lights in many cultures and themselves need the invisible and unspeakable foundation. (Which all have or none would live at all - but the Gospel should make it easier to express - though not to understand or explain.)

Mind you, my comments locating the Gospel in the Psalms or in TNK are not considered acceptable in some circles - or I am subject to bugs in posting comments.

I hope you are well - I have always appreciated your zeal and tenderness since you must approach all these things with a multicultural background. I think I find my own zeal sometimes borders on anger and impatience. Maybe that's why my blather sometimes gets censored.

I just bought Barnstone's The Complete NT, and I'm looking forward to digging into it. Most of the so-called bad words is our Victorian baggage and has nothing to do with the biblical text, which can get pretty vulger. (Thinking of the story of Abigail where David's oath about "not letting one who pisses against a wall live" gets watered down to "not let one man live.")