We don't usually boycott films or books.  But this morning "J" tells me she's not sure about "The Help."  Maybe she'll go with our daughters and use it as a teaching moment.  She'd seen Melissa Harris-Perry's review.  I'd told her what "V," our friend, had shouted out to me last night as her husband, their son, our son, and I jumped in the car to go to the T. D. Jakes "man" conference.  "The book is good," V said. "But not the movie."  That's Oprah's assessment too, my spouse reminded me.  And Oprah's question to all of us is, "So what do you think?"  And Martha Southgate's evaluation - "The Help is only a symptom, not the disease" - almost gives the book and the film a pass.  However, there's still the question,

Whether you do or not, whether you consider a movie viewable because it's only a symptom, then can we see the disease?

Southgate points it out the disease of remembering and figuring white people as necessary but black people as always just merely only in the shadows, as marginal, even in their own histories.  She concludes:


Suffice it to say that these stories are more likely to get the green light and to have more popular appeal (and often acclaim) if they have white characters up front. That's a shame. The continued impulse to reduce the black women and men of the civil rights movement to bit players in the most extraordinary step toward justice that this nation has ever known is infuriating, to say the least. Minny and Aibileen are heroines, but they didn't need Skeeter to guide them to the light. They fought their way out of the darkness on their own — and they brought the nation with them.

And this history is still being written.  We may be part of the contagion, of the spread of the disease today.

If we ourselves are not, then at the very very least, the movie industry that we support by our movie watching is.  For example, just a few months ago this year, the day after the Oscars were handed out earlier this year, Kevin Eason stated the obvious:


"As controversial as the Oscar nominations usually are, there is one issue that stands out more than most. Namely, why are there no black Oscar nominees this year?"

Then Easton concludes, as with some hope:


"It also seems that there may not be that many opportunities this year for African-American actors to make the shortlist either. Two big films that might change the situation are The Help, about the lives of housemaids during the segregation of the Civil War-era, and Winnie, a biopic of Winnie Mandela starring Jennifer Hudson...."

Of course, Easton might have seen the disease, with both of his hopeful films this year being symptoms.  Nonetheless, it seems he didn't anticipate the controversies surrounding either film.

And it's based on the book Winnie Mandela: a Life, by white South African, Anné Mariè du Preez Bezdrob, the former UN peacekeeper and radio reporter, who also wrote The Nelson Mandela Story, about Winnie's ex-husband of course.  But neither du Preez Bezdrob nor Roodt consulted either of the Mandelas for the books or the film.

The book by du Preez Bezdrob didn't fairly represent Ms. Mandela's experience, according to some.  For example, the Nigerian-Jewish British actor, Sophie Okonedo, who played Winnie Mandela for the tv film "Mrs. Mandela," said this about the book:


[I had to do my research] about five weeks before filming. So I started reading. I read the Anthony Samson book, which gave me a pretty good overview; the Emma Gilbey book, which is more judgmental I think. I started the one which is quite famous, Winnie Mandela: A Life [Anné Mariè du Preez Bezdrob], but I just thought she kept assuming things about Winnie. There was lots of, "No one knows what happened in that cell but we can imagine"… then a whole chapter of imaginings. I just put that book down.

The film by Roodt is one that Winne Mandela herself has publicly criticized:


"I have absolutely nothing against Jennifer [Hudson, who was cast to play me], but I have everything against the movie itself," she told CNN.  "I am still alive and I think it is total disrespect to come to South Africa, make a movie about my struggle and call that movie some translation of a romantic life of Winnie Mandela. I think it is an insult."

Of course, "Winnie" may earn Jennifer Hudson an Oscar nomination.  Likewise, "The Help" may provide Viola Davis or Octavia Spencer an Academy Award nomination as well.

Any yet, we may well note already how differently the main black actress(es) of "The Help" are being portrayed in the media compared with the main white actress.  As you decide whether to go see "The Help," notice just the magazine cover differences.  Notice which magazines Emma Stone is the cover girl for.  Notice which ones for Viola Davis and for Octavia Spencer.  Already our daughters (and sons) are getting an education in the representation of women, and of white and black women differently: 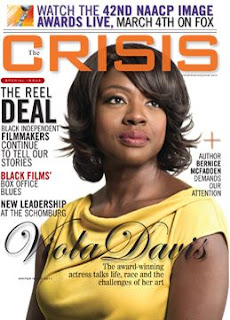 (*Please note, in this comment I will refer to African Americans as "black" because as of late that seems to be the term of preference my black friends and acquaintances have had for themselves, though I know the terminology is a hugely sensitive topic.)

I definitely agree that racial movies too often skew the story and make the white person look like there hero. That's why I didn't like "The Blind Side", because it made Oher look like some autistic ghetto kid who didn't know how to put sentences together and whom Tuohy had to come save. (Seriously, who wrote Oher's character in that film??) However, I didn't get the same vibe from "The Help". I saw it more as a partnership between the black protagonist and the white one, which is an important point to make. Legitimately, the Civil Rights Movement would not have PEACEFULLY made any progress if black protesters hadn't had white people on their side, fighting with them. Whites who stood for racial equality sometimes faced as much danger or ostracization as the black friends they were fighting for. Even the president (JFK) had to stand in the gap for an oppressed people, despite growing death threats. If the black population had not had white political, spiritual, and community allies, not as much change would have been affected, and what changes did take place would probably have had to come at a much higher cost of fear, violence, and death. It's a disgusting truth; it's white privilege. Thankfully, as a result of the black/white partnership of the Civil Rights Movement, in our own day there are enough laws in place to keep us in a more racially equitable state (though we all know racism is alive and sometimes thriving).

I feel the same about the Feminist Movement, and the egalitarian movement currently happening in the Church today. I can debate, argue, eloquently state Biblical truths about gender equality til I'm blue in the face, but if I don't have Christian brothers backing me, my voice gets nowhere. I cannot count the times I've been patronized by a male complementarian - written off because I'm so obviously "more easily deceived" than they and have so obviously fallen prey to another "deception" of the enemy. As much as I hate to say it, having men believe, back up, fight for, and biblically justify egalitarianism gives it credence in the Christian world. It's disgusting; it's male privilege. If I get impassioned by the topic I am called emotional and simply written off, but my Christian brother can get impassioned about gender equality and continues to be respected at a level that I will not be until the Christian culture has a mind shift.

R.S.,
Thank you very very much for your comment! None of us is alone in our struggles and none can fight oppressors all by our self or even all by ourselves with merely our own kind. I think this is the strong and important point that you're making. It's something that needs to be emphasized and heard more.

I am struck by how Jesus, for example, would use parables of the oppressed to make his point. And we can find him in them. Isn't he self-identifying with the good Samaritan in that parable rather than telling his non-Samaritan listeners to become Samaritans or like the loving one in the parable? Isn't he refusing to be seen as "pure" as "high class" if he's saying also something like, "look, I'm as bad as any Samaritan and I'm also as good"? The mix of views and of identities is important. My wife tells me that in the book The Help one of the characters is viewed as mixed, as fathered by a white illegitimately, and so there's great effort by the maids and their supporters to shuffle her away, out of the way. I think an African American writer like Trey Ellis or an African American actor like Halle Berry or an African American president like Barack Obama would be interested in the "mulatto" being heard and supported.

We did see the film "The Help" last evening. I don't have time to post a review. I do have time to give homework to anyone considering seeing it. I'd ask that they read Jacqueline Jones Royster's essay, "When the First Voice You Hear is Not Your Own." And also do all of the homework that Kismet Nuñez gives here: