A Novel Daughter-"Man?" of the 1st Century

Thus begins the 1st-century A.D. novel by Chariton, right after my quick parenthetical note below:


(We all know that the novel as it begins is only fiction, but is the author really trying to make his readers believe that his female protagonist is mainly a "man"?  Can his masculine Greek grammar keep her out of the human race of men and women?  Has a god (a male) stopped her from looking like the equally-divine goddesses and gods?

Hermocrates, ruler of Syracuse, victor over the Athenians, had a daughter named Callirhoe, a marvelous virgin and the delight of the whole of Sicily. However, the beauty was not a man's but was a god's, not that of a Nereid or a Nymph on the mountain but of the Virgin Aphrodite herself.
----an ESV-like translation

Hermocrates, ruler of Syracuse, victor over the Athenians, had a daughter named Beauty, an amazingly eligible bachelorette and the delight of the whole of Sicily. Her beauty, in fact, was not merely human but was rather divine; not merely the beauty of a daughter of Nereus or even the beauty of a Nymph on the mountain but rather the beauty of Aphrodite, the Most Marriable Bachelorette Herself.
----an Ann Nyland-like translation 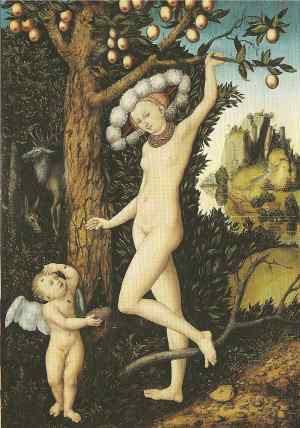 (This image reminds me somehow of the Genesis story of the very human Eve and Adam in the garden.  Of course, it's a painting of the divine Aphrodite and Eros.  I found the image at Nicos Stylianou's igreekmythology.com.  He provides this information.


Name:"Aphrodite and Eros"
Museum:National Gallery, London, England
Artist and Year:Lucas Cranach Sr.,ca. 1430
Theme: Aphrodite talks with her son Eros, who has been stung by bees.)

wonderful
thank you
glad you're back!

Jane, you're such an encourager!

Anti-pshaw on your demonstration that the Colorado Springs Guidelines are not that useful in actually conveying the ideas behind Greek sometimes.