The first English translator of Aristotle's Rhetoric in 1685, writes the Preface to King James II and VII. There is reference to Sir Phillip Sidney and to "his sister, the Countess of Pembroke." The one is praised for his rule and his military accomplishment, the other for being "the ornament of her age":

Accomplifhments, which you your felf fo confpicuoufly inherit by a long defcent of Famous Anceftry. Story, that near will dye, admires once govern’d with applaufe by Great and Prudent ; no lefs Famous for the overthrow of Shane, Oneal and all his Rebel Crew. Nor can Time deface the Memory of Sr. Philip, of whom Thuanus, Juvenis virtute, ingenii foleria & eruditione preftans; nor of his Sifter the Countefs of Pembook, once the Ornament of her Age.

I'm not going to say much more here. Below is a snippet from Mary Sidney's translation of Psalm 139, in comparison with the Geneva Bible, the King James I Bible, and the original Hebrew and the first Greek translation. See how different the translating by Mary Sidney Herbert! (And note that Robin P. Williams as done a fair amount of research speculating that Mary Sidney wrote the works attributed to William Shakespeare. See http://www.marysidney.com/.) 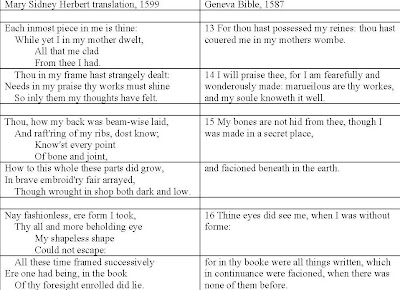 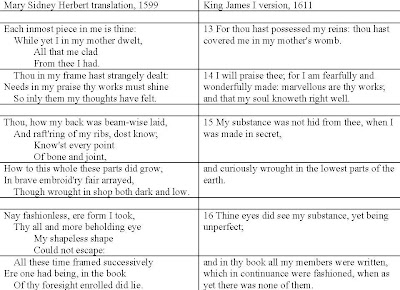 that is fabulous poetry and translation, where can one find the text?

Thanks for stopping by, Nathan. Appreciate your comment and good question. Here's one source: