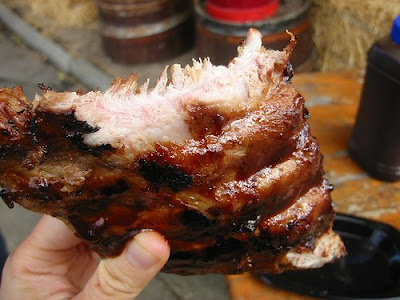 A couple more (of my) purely objective observations while eating lunch w/ my brother:

In Cowtown Texas USA at around 11:38am Central on Thursday July 17 2008, the Railhead was packed. Packed, that is, with us EuroAmerican men, around 100 of us. There were just 3 EuroAmerican women, each accompanied by men. In the open kitchen were 5 HispanicAmerican men cooking, slicing, and serving up. The 1 cashier was a Latina. The 2 bus"boys" and 2 bartenders were EuroAmerican women. There were 0 [zero] persons of African, Asian, or MiddleEastern descent.

Now I'm not asking Why there's such contemporary segregation, or Who's choices have made for such a "melting pot" in the Bible Belt. Let's just let the former slaves and the present feminists pre-occupy themselves with such subjective, perhaps imagined, and alltogether tasteless questions. Ah'm just lickin' the BBQ sauce off my fingers.

Oh, and I'm not reading any more of Carolyn Osiek, whose final paragraph in "The Feminist and the Bible: Hermenuetical Alternatives" goes like this:

"In biblical times [Thank God for the good ol' days, when we could eat out and git served as we liked],

patriarchy and androcentrism were not seen as sinful but as necessary for maintaining order [We see nothin' like that here: pass the ribs and sauce please, and a napkin].

With consciousness now raised, the primary hermeneutical task is a redefinition of order in human society [Redefinition is for them libs only, Ah'm sure],

a hermeneutic already applied in the case of slavery [Can't we just git past bringin' this up all the time? That war's done been fought]

currently being applied on the issue of the necessity of deterrence for the preservation of peace [Hey, ain't this why we're proud 'Mericans fightin' terror in Iraq?].

There is no reason to treat the evil of patriarchy any less seriously [hmmm, I wuz thinkin' John 'n Sarah 'n Hegel had a better plan--can't we all just git along?]."

[Sorry for them interpolations here; ya know, them biased opinions just cain't go unchecked!]
Posted by J. K. Gayle at 8:37 AM

Labels: patriarchal hierarchy and androcentric order? what are yew talkin' about?, that's what napkins is for (to clean up messes)