As promised, here's my handout for my defense. Hope you find it interesting, even relevant to you in some way.

My dissertation advisor and committee chair, Dr. Charlotte Hogg, advised that my defense "must sparkle with clarity and coherence." (She'd become nearly accustomed to my writing otherwise.) And my reader-group colleagues, Jason King and Moriah McCracken, some of the best and clearest and most coherent writers I know, gave me pointers all that week up to the defense. Moriah had tracked with personal stories, and encouraged me and my family with the implications of the dissertation even in the blogging here. I decided, in my defense, to tell stories, as bookends around this handout I'd made: in a quaky voice unworthy of our president elect, I began by quoting Barack Obama telling the story of Ann Nixon Cooper, a woman, a black woman, giving voice in government, and telling the story of his daughters now having hope. And one of my daughters, Amelia, was in the room, so I expressed my hopes for her and her sister in relation to their brother. We talked of Aristotle's persistent influence on the silence of women in Western cultures.  (Amelia was "Helen" in her school play "Troy" and she happily stapled the handout together the night before and colored the little cartoon on the second page, as you see it below). After speaking for 25 minutes, running through the handout, I quoted Nancy Mairs telling her story of "defending" her "dissertation," a violent separating but a narrative that ran back and forth, sort of like mine. The committee members asked such wonderful, thoughtful and thought-provoking questions. And they did so for more than an hour before Dr. Hogg invited questions from the audience. My wife, who culled my project into the two word phrase "Aristotle Exposed," and who teaches me many things about writing well and good and many things if I'd just learn, was in the room. My mother, who had taught me to read, also was there, listening. My brother from London was there, and asked a couple of questions, following up on our earlier conversations about the project. Then my Dad spoke. "Kurk, I have a problem," he started. (I'll let you imagine what he asked--but it certainly did reveal a lot, I thought, about the unmarked positions of patriarchy). Later, he and Mom each emailed to say they were proud of me. I was thrilled and honored that so many showed up with so much intellectual curiosity and willingness to listen to one another in this process. 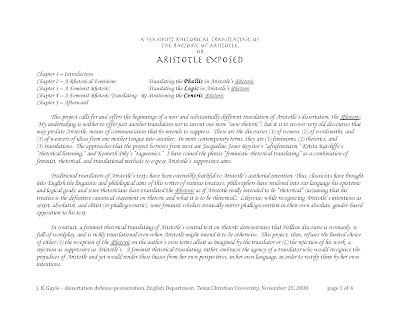 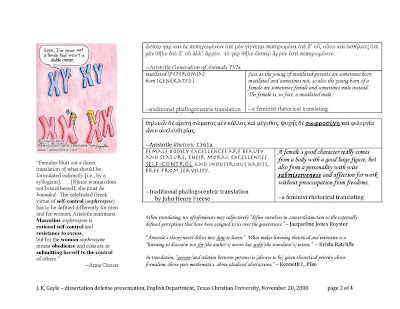 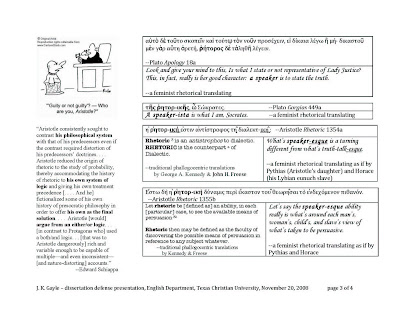 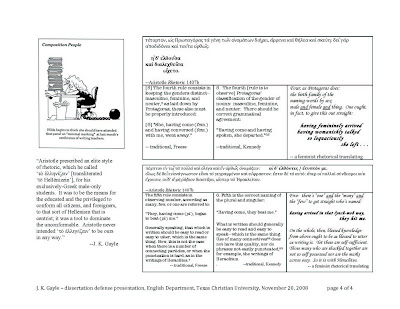 From what you say, it's just as well I wasn't in the audience as my understanding goes about as far as admiring all the pretty fonts and wondering how you managed to get so many different ones on each page. (Or as my father used to say: "I don't know what you're saying, but I like the way you say it.")

I assume old Aristotle got an invite, but I bet he didn't even send his apologies for not showing.

Anyway, next time anyone mentions him (although, strangely, that doesn't seem to happen often in the circles I move in), I'll be able to say: "Well, that well-respected literary scholar, Dr J K Gayle, says that Aristotle thought with his dick and talked through his arse." (Does that broad-brush summary get it about right?) But then, just what do you say about someone who apparently thought men's testicles are suspended from their vocal cords (or something like that)? I'd guess, pretty much the same as I'd say about those people who go on insisting that "women are equal but different", while apparently defining "different" and "equal" to mean "subservient" and "inferior".

Now, to save me from having to read the entire dissertation: if you're saying that old A's attitudes still pervade our civilised, cultured, Western societies today, can I ask where his "understanding" (I use the term loosely) and ideas came from? Was it just that he happened to be the one who wrote it all down, or was it original "thinking"? Either way, presumably his ideas derive from his own cultural and societal background that, like many today, he simply redefined as "givens".

Did I say congratulations? Oh I see I did. Never mind, there's no harm in saying it twice.

Thank you, John, for your kind remarks. I think I mostly agree with you, except that part about "well respected." We do have so much more to talk about. As always, I appreciate your keen take on things!