If Your Body's Sexed Female, Mind the Gap

Imagine the gap between the train door and the station platform being greater for you, if your body's sexed female, than for everybody else (i.e., for those whose bodies are sexed male).  Now, wouldn't that be absurd?

And yet, historically and currently, the gap between what a woman earns, because she's a woman, and what everybody else earns (i.e., men) is absurdly great.  Here's the latest: 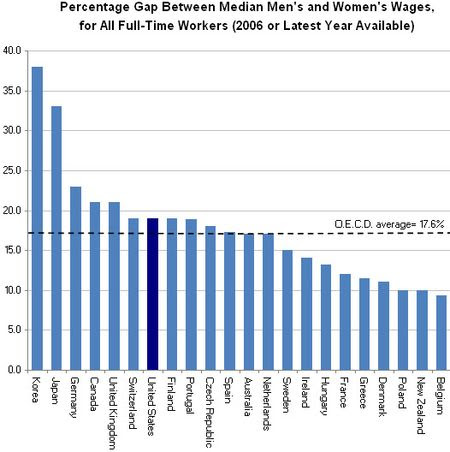 No where among developed and developing nations has the gender wage gap been greater for women than in Korea (Catherine Rampell at Economix, HT Michael Kruse at Kruse Kronicle; go here for the World Economic Forum's Gender Gap Index with worldwide rankings).

Given John Hobbins's comments this week, I wonder why Korea.

Hobbins has asserted that "Korean Christianity remains strongly complementarian [i.e., male is the leader over females] in the pulpit and the home: hardly surprising, given the compatibility of New Testament teaching with traditional Korean mores in that sense."  Hobbins is trying to argue that "complementarian" Christianity is "the primary cultural slope on which cultural change has occurred in South Korea."  He is attempting to debate the claim made by the Economist that, in Korea, it's been the "forces of modernity" that "first exacerbated [gender] prejudice--then overwhelmed it."  Hobbins cannot bring himself to acknowledge that "complementarian" Christianity is one of the forces of modernity.  (But it is.)  Hobbins likely won't bring himself to acknowledge the co-incidence between male-over-female cultural teachings and the persistent gender wage gap in Korea.

It's approaching a quarter of a century now since Korea passed its Equal Employment Opportunity Act, in 1988, which guaranteed protection by gender in employment, and still there's little improvement.  If you ask Koreans why, the answer typically is that it's the woman's choice.  But at least one Korean economist has compared "individual women’s rational choices" against "gendered devaluation and social closure"; and Dong-ju Lee concludes that "sex segregation" and "male chauvinism or social closure" have likely been "the most important mechanism[s] generating women’s low income and low economic status" in Korea since 1997.  As we all know, economic theories and speculations offer only so much in explaining co-incidence of societal attitudes and wage conditions.  (And yet, there remains this nagging suspicion of a causal co-incidence, as the person whose body's sexed female must continue to mind the gap between herself and everybody else.)
Posted by J. K. Gayle at 10:59 AM